The week of October 21, 2018 saw new activity at the Grande Ballroom. Onlookers would have seen the application of a new coat of paint to the building…. 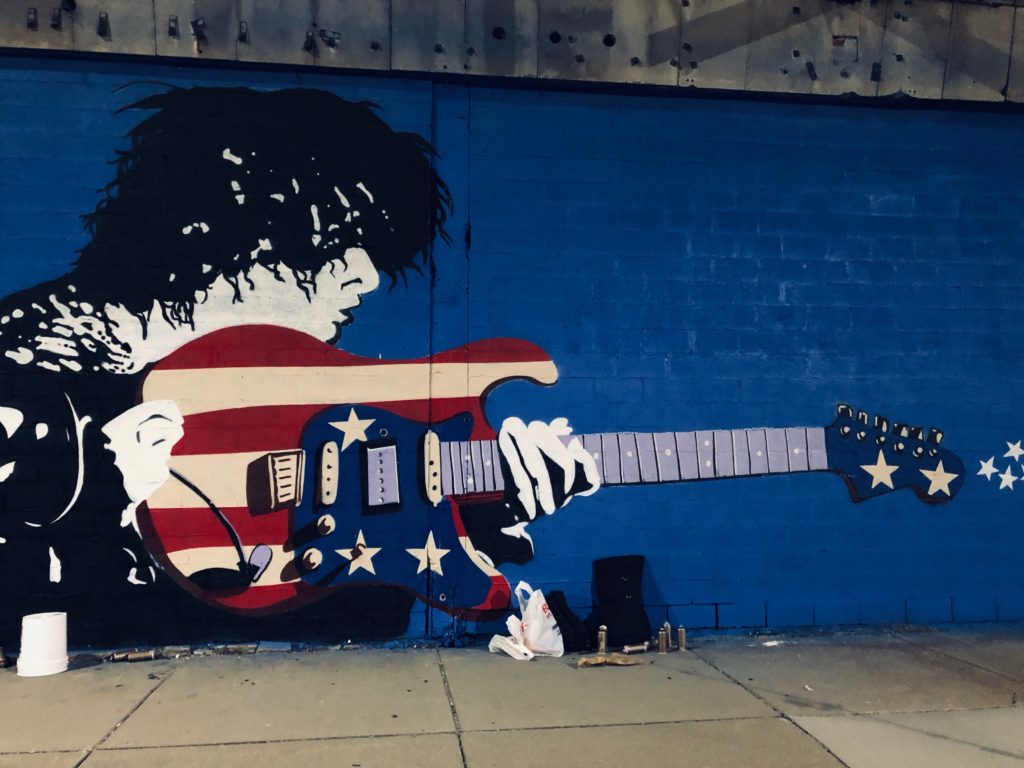 This was the beginning of the new community art project underwritten by Wayne and Margaret Saadi Kramer’s Jail Guitar Doors charity. For those unaware, Jail Guitar Doors (JGD) is the Kramers’ non-profit organization providing musical instruments and mentorship to help rehabilitate prisoners through the transformative power of music. JGD is presently active in over 130 correctional facilities in the U.S.

The objective of the mural is to depict Wayne’s story, the positive mission of Jail Guitar Doors and to highlight the historical significance of the Grande Ballroom itself.

The narrative of the mural speaks of the definitive Grande Ballroom resident act, the MC5. A large Stratocaster-wielding Wayne Kramer shoots stars around the corner from the Grand River elevation to the Beverly Court facade. These stars then transform into images representing Kramer, the MC5 and Grande Ballroom history. Paralleling these components are additional elements representing Mr. Kramer’s influences. recovery and the jail guitar ethos of “Rock n’ Roll Redemption”.  Overarching the mural will be a Kramer mantra; ‘Maximum Effort – Limitless Possibilities”

Justin McCormack of Modern Pirate Brands is managing this project for the Kramers. Justin has flown in from Los Angeles with talented muralists Gabriel Gault and Diego Mendoza-Ramos, Gabe and Diego have been painting the project in partnership with local sign artist Zak Warmann. 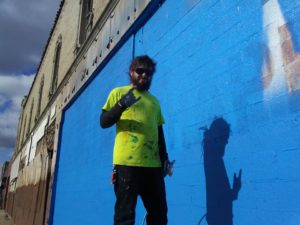 The Friends of the Grande’s Leo Early coordinated Jail Guitar Doors’ proposal with the current owners of the Ballroom, Chapel Hill Missionary Baptist Church.  The Friends of the Grande are working with the church to assess and position the Grande for potential redevelopment.  The property is awaiting final approval from the National Parks Service for inclusion on the National Register of Historic Places, The mural “facelift” will be a tremendous improvement in the look of the area and its positive message shall also serve to focus attention on the challenges of the building and the neighborhood.

All of this attention comes at a significant moment in time. Over Halloween weekend in 1968 the MC5 recorded their debut album live at the Grande Ballroom. On that LP’s 50th year anniversary, Wayne Kramer is again performing the MC5 canon in Detroit as part of the MC50th tour. The Kramers’ mural gift is expected to be completed by the turn of the month.

This entry was posted in News. Bookmark the permalink.